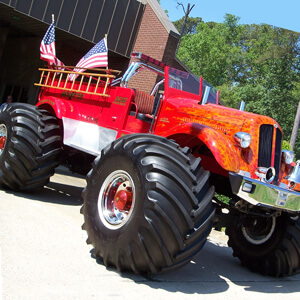 America’s Funniest Home Videos was/is a really popular TV show. I remember watching it with my parents growing up, and we all really enjoyed it. The format makes sense: user submitted content, stupid and hilarious in nature, edit it down and add in a comedic commentator. Pretty simple.

CMT decided to make their own show using this format. To make it more targeted to their audience, they called it “Country Fried Home Videos”. Its hosted by Bill Engvall, best known as the ‘Here’s your sign’ guy on the Blue Collar Comedy Tour.

The show’s producers found out that Virginia Beach has a monster truck Fire truck. It’s called “Monster 1” fire engine. It runs off natural gas and is used for promotional things such as: parades, fire safety showcases at schools, promotion of natural gas, etc… When I talked to the CMT producers, all they heard was fire truck and monster truck, the epitome of hillbilly of all fire trucks. Like AFV, Country Fried Home Videos are mostly user submitted, but every so often for noteworthy subjects, they will record their own footage for special segments. Obviously, they really wanted to get this monster truck.

I found the job through Craigslist and it seemed interesting. They needed a local sound man and camera operator to go get footage of the truck in action and interview the Virginia Beach City Fire Marshall. Like most network TV shows, the networks don’t directly produce the show. I hadn’t heard of the production company that posted the ad, but I didn’t actually care. The money was mediocre, but seemed legitimate. It was a half-day job; paid $150 to sound (me) and $125 to the camera operator.

I responded to the ad, talked to the producer, and landed the job. They looked to me for a camera op recommendation, so I referred my buddy Abe Vilchez-Moran. I had to give them details of the camera he was using, which, at the time, was a Canon GL2. It didn’t have any XLR inputs, so I had to convert both channels to 3.5mm. The producers weren’t happy about his prosumer level camera and ended up negotiating the camera operator pay down to: $75. Those cheap skates.

Anyway, we get down to the Virginia Beach fire training center and meet up with the fire marshal, Ed (I forget his last name). He leads around back to the training building that they set on fire for practice. Normally, Monster 1 is only used for public relations events, not for actual fire fighting or practice. However, the show is for CMT and the producers want to showcase a simple monster truck fire truck. They don’t care about the public relations aspect of the truck. This is evident during their interview with Ed (more on that later).

So Ed gets a team ready and they go through a full blown mock fire scenario: they set the building on fire, ride onto the scene atop Monster 1, and put the blaze out. This part was really cool to watch. I even managed to ride on the truck while Abe filmed it for me. :) I posted the video below. It contains a little bit of our interview prep with Ed.

After the practice firefight and my little joy ride, Ed parks Monster 1 and we ready for the interview. Keep in mind that the show’s producers never came out to Virginia Beach. They hired us remotely (off of Craigslist), gave us a run down over the phone of what they wanted to see, talked to Ed over the phone, and left it in our hands. This was, after all, only for a little segment of the show. The most active part they seemed to have was for the interview. They called my cell phone, I put them on speaker phone, and they asked Ed their questions. They didn’t have control over the shots, lighting, or much of anything else. They put a lot of trust in us, the local talent. In hindsight, we should have done the interview first. As you can see form the tail end of the Youtube video above, Ed was sunburned except for where he was wearing his glasses. He didn’t exactly look “network TV ready”, heh heh. Anyway, as mentioned before, the producers didn’t care about all the educational, promotional, or charitable aspects of Monster 1. They only cared about fire truck + monster truck = awesome. This was pretty clear to me from the questions they asked. They asked things like: what it was like to use it to put out fires, how quickly it could arrive on scene, how many firefighters rode on it, etc… These were things that didn’t really apply to Monster 1 because it wasn’t used for actual firefighting. I felt bad for poor Ed. He kept trying to tell the producers that and even kept steering the conversation back to what mattered to him: all the real benefits that Monster 1 did and represented for the community. Sigh. The show producers didn’t care.

When it was all said and done, they had a competent enough interview that they could chop answers out of, a decent looking video, and (what I thought was) a complete product. Turns out later, the producers were unhappy with what we delivered to them and tried to not pay us. That’s a story best saved for its own post later. In any case, it was actually a lot of fun (aside from the heat) and a helpful learning experience. I took only a few photos on set. They’re posted below: