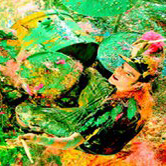 This is the music video “Out The Door” for the artist ‘Still Pink’. They are a three man local Virginia Beach band we did a music video for back in May of 2007. This was the first music video I ever worked on. I remember it well because the entire premise was to throw as much crap as possible at the band while they performed. It was a blast!

As I look through the BTS videos and production pics, I realize that this is one of the first projects I had brought my friends on board: Bill Ludwig, Thomas & Chris Wilson. Bill pissed off the lead singer (also named Chris) by pelting him in the face with a food-color filled water balloon. Chris was so mad he wanted to punch Bill. I didn’t get any of that drama on camera, but you can see Chris get nailed in the face midway through the the BTS video that I took.

You’ll also see that a fire extinguisher is being used. It was one of the dry chemical extinguishers and that thing must have been far past the expiration date. It reeked! By the end of the video, you can hear everyone coughing & gagging because we’re being suffocated by the smoke and horrendous smell.

For all the non-“Nickelodeon Splat!” shots, I had limited involvement. I drove the van for the running shots while the director filmed out the rear doors. All the stairwell and parkour-ish stuff was done with just the band members and the director. I was on fire-watch.

Ultimately, this video was a ton of fun to make! The stuff we are throwing at the band members consists of tomato sauce, various food-colored mixtures, confetti, fire extinguisher, etc…

Still Pink - "Out The Door" from Entrepid Media on Vimeo.