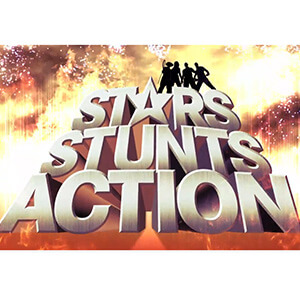 During filming, it was called “Sidekick Cinema”, but the released pilot ended up being called “Stars Stunts Action”. It was an action & stunt focused TV show that showcased stunt people in the film industry: the lives they lead, the stunts they do, and the stories they had to tell. I was on board for making the pilot episode, which, as far as I know, is the only episode ever created.

Principal photography lasted 6 days, from Jul 20th to Jul 25th of 2008, and was done entirely in Los Angeles. I was truly excited to be part of this production as it was the first paid job that would be flying me out to LA, had a pretty decent pay, and was about cool stuff like stunts! Day 1 was filming at the red carpet premiere of “The Mummy 3”. The movie itself was mediocre, but I had never been to a red carpet premiere; and the concept of interviewing Brendan Fraser & Jet Li was quite exciting!

I’ll go into detail of what happened each day, what we did, who me met, etc… at a later time. I’m still working from memories right now and I’ll have to update this post as those memories return to me (with a little help from research).

For now, here are some various media I’ve found about “Stars Stunts Action”/”Sidekick Cinema”. The production photos I took are posted at the end.

Here is a shortened opening:

Here is an test edit for the opening sequence (outdated & obviously unused):

Here is the link to the full pilot episode. The permissions of the video won’t let me embed it, so you’ll have to click the link to go see it on Vimeo’s site.
https://vimeo.com/10238535

The production photos that I took are posted here: